Brinker Capital Investments LLC lifted its stake in ProPetro Holding Corp. (NYSE:PUMP – Get Rating) by 31.4% in the 3rd quarter, according to the company in its most recent Form 13F filing with the SEC. The firm owned 65,506 shares of the company’s stock after buying an additional 15,647 shares during the period. Brinker Capital Investments LLC owned about 0.06% of ProPetro worth $527,000 at the end of the most recent reporting period.

Want More Great Investing Ideas?
ProPetro (NYSE:PUMP – Get Rating) last issued its quarterly earnings results on Tuesday, November 1st. The company reported $0.38 earnings per share for the quarter, beating analysts’ consensus estimates of $0.36 by $0.02. The business had revenue of $333.01 million during the quarter, compared to analyst estimates of $339.10 million. ProPetro had a negative net margin of 2.65% and a positive return on equity of 7.36%. On average, sell-side analysts expect that ProPetro Holding Corp. will post 1.23 EPS for the current year.

ProPetro Holding Corp. is an oilfield services company that engages in the provision of hydraulic fracturing and other complementary services. It operates through the following segments: Hydraulic Fracturing, Cementing, Coil Tubing, Flowback, and Drilling. The Hydraulic Fracturing segment intends to optimize hydrocarbon flow paths during the completion phase of horizontal shale wellbores.

Want to see what other hedge funds are holding PUMP? Visit HoldingsChannel.com to get the latest 13F filings and insider trades for ProPetro Holding Corp. (NYSE:PUMP – Get Rating). 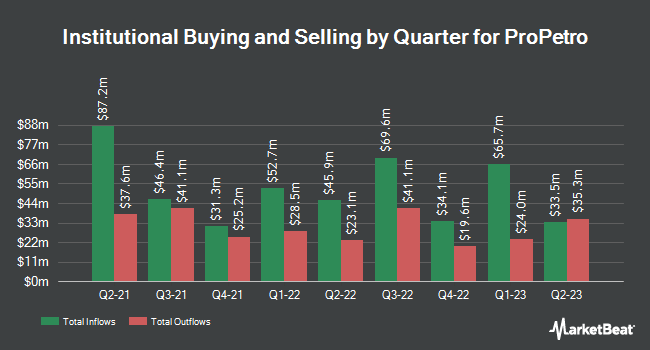