Ovintiv (NYSE:OVV – Get Rating) last posted its quarterly earnings data on Tuesday, November 8th. The company reported $1.44 earnings per share (EPS) for the quarter, missing the consensus estimate of $1.98 by ($0.54). Ovintiv had a return on equity of 53.16% and a net margin of 29.27%. The firm had revenue of $3.55 billion for the quarter, compared to analyst estimates of $2.52 billion.

Hedge Funds Weigh In On Ovintiv

The company also recently announced a quarterly dividend, which was paid on Friday, December 30th. Shareholders of record on Thursday, December 15th were issued a dividend of $0.25 per share. This represents a $1.00 dividend on an annualized basis and a yield of 1.99%. The ex-dividend date was Wednesday, December 14th.

Ovintiv Inc, together with its subsidiaries, engages in the exploration, development, production, and marketing of natural gas, oil, and natural gas liquids. It operates through USA Operations, Canadian Operations, and Market Optimization segments. The company's principal assets include Permian in west Texas and Anadarko in west-central Oklahoma; and Montney in northeast British Columbia and northwest Alberta. 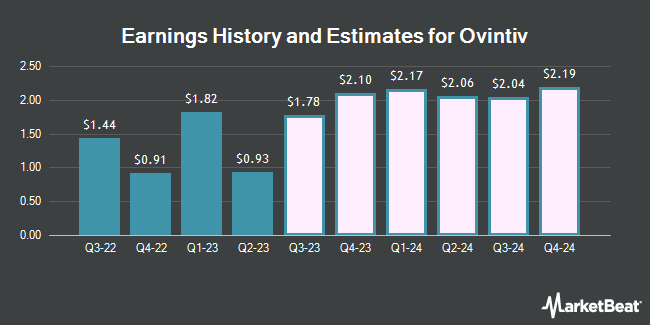 Receive News & Ratings for Ovintiv Daily - Enter your email address below to receive a concise daily summary of the latest news and analysts' ratings for Ovintiv and related companies with MarketBeat.com's FREE daily email newsletter.

Complete the form below to receive the latest headlines and analysts' recommendations for Ovintiv with our free daily email newsletter: