Century Communities (NYSE:CCS – Get Rating) is set to issue its quarterly earnings data after the market closes on Wednesday, February 1st. Analysts expect the company to announce earnings of $2.39 per share for the quarter. Investors that are interested in participating in the company’s conference call can do so using this link.

Century Communities (NYSE:CCS – Get Rating) last announced its quarterly earnings data on Wednesday, October 26th. The construction company reported $4.44 earnings per share (EPS) for the quarter, topping the consensus estimate of $4.20 by $0.24. Century Communities had a return on equity of 32.06% and a net margin of 13.47%. The company had revenue of $1.14 billion for the quarter, compared to analysts’ expectations of $1.09 billion. On average, analysts expect Century Communities to post $16 EPS for the current fiscal year and $9 EPS for the next fiscal year.

Want More Great Investing Ideas?
The business also recently announced a quarterly dividend, which was paid on Wednesday, December 14th. Shareholders of record on Wednesday, November 30th were given a dividend of $0.20 per share. The ex-dividend date was Tuesday, November 29th. This represents a $0.80 annualized dividend and a yield of 1.34%. Century Communities’s dividend payout ratio (DPR) is presently 4.40%.

In related news, CFO John Scott Dixon sold 3,558 shares of the firm’s stock in a transaction on Tuesday, December 13th. The stock was sold at an average price of $53.38, for a total value of $189,926.04. The sale was disclosed in a document filed with the Securities & Exchange Commission, which is accessible through the SEC website. 11.90% of the stock is currently owned by company insiders. 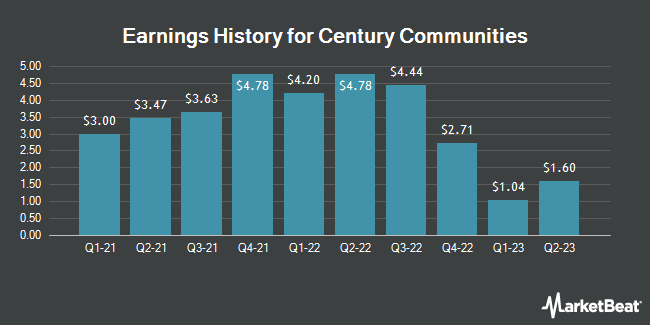