Comerica Bank cut its stake in shares of Graham Holdings (NYSE:GHC – Get Rating) by 2.2% during the 3rd quarter, according to the company in its most recent disclosure with the Securities & Exchange Commission. The firm owned 1,753 shares of the company’s stock after selling 40 shares during the period. Comerica Bank’s holdings in Graham were worth $1,033,000 at the end of the most recent reporting period.

A number of brokerages have recently issued reports on GHC. StockNews.com began coverage on Graham in a research report on Wednesday, October 12th. They set a “hold” rating for the company. TheStreet raised shares of Graham from a “c” rating to a “b+” rating in a research note on Monday, December 5th.

Graham (NYSE:GHC – Get Rating) last released its earnings results on Wednesday, November 2nd. The company reported $15.65 earnings per share for the quarter. Graham had a return on equity of 2.78% and a net margin of 3.91%. The company had revenue of $1.01 billion during the quarter. 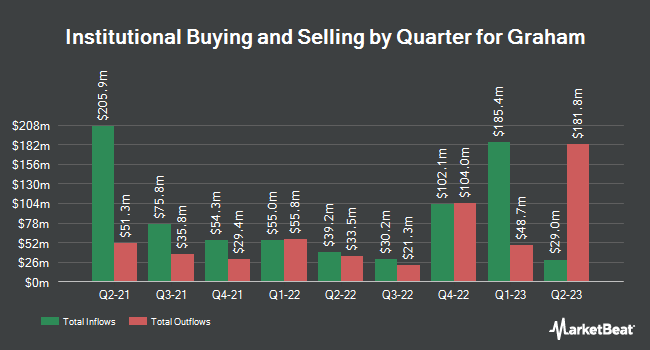 Receive News & Ratings for Graham Daily - Enter your email address below to receive a concise daily summary of the latest news and analysts' ratings for Graham and related companies with MarketBeat.com's FREE daily email newsletter.

Complete the form below to receive the latest headlines and analysts' recommendations for Graham with our free daily email newsletter: