Cullen/Frost Bankers (NYSE:CFR – Get Rating) will be posting its quarterly earnings results before the market opens on Thursday, January 26th. Analysts expect Cullen/Frost Bankers to post earnings of $2.75 per share for the quarter. Persons interested in participating in the company’s earnings conference call can do so using this link.

Want More Great Investing Ideas?
The business also recently disclosed a quarterly dividend, which was paid on Thursday, December 15th. Shareholders of record on Wednesday, November 30th were paid a dividend of $0.87 per share. The ex-dividend date of this dividend was Tuesday, November 29th. This represents a $3.48 dividend on an annualized basis and a yield of 2.55%. Cullen/Frost Bankers’s dividend payout ratio (DPR) is 46.71%.

In other Cullen/Frost Bankers news, EVP Bobby Berman sold 1,941 shares of the business’s stock in a transaction dated Friday, October 28th. The stock was sold at an average price of $151.62, for a total transaction of $294,294.42. Following the completion of the sale, the executive vice president now directly owns 24,589 shares of the company’s stock, valued at approximately $3,728,184.18. The sale was disclosed in a document filed with the Securities & Exchange Commission, which is accessible through the SEC website. 3.76% of the stock is currently owned by company insiders. 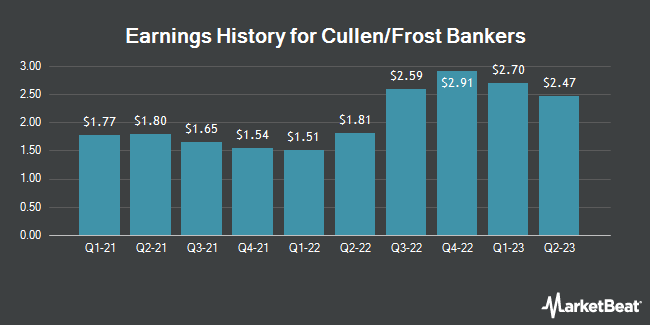