Wedbush began coverage on shares of Dutch Bros (NYSE:BROS – Get Rating) in a report published on Tuesday, The Fly reports. The brokerage issued a neutral rating on the stock.

Want More Great Investing Ideas?
Dutch Bros (NYSE:BROS – Get Rating) last announced its quarterly earnings results on Wednesday, November 9th. The company reported $0.02 earnings per share for the quarter, topping the consensus estimate of ($0.01) by $0.03. The company had revenue of $198.65 million for the quarter, compared to the consensus estimate of $196.27 million. Dutch Bros had a negative return on equity of 2.74% and a negative net margin of 1.03%. Research analysts predict that Dutch Bros will post -0.06 earnings per share for the current year.

In other Dutch Bros news, CMO John Patrick Graham sold 8,000 shares of the firm’s stock in a transaction that occurred on Wednesday, December 14th. The shares were sold at an average price of $31.31, for a total value of $250,480.00. Following the transaction, the chief marketing officer now directly owns 163,332 shares of the company’s stock, valued at approximately $5,113,924.92. The transaction was disclosed in a filing with the Securities & Exchange Commission, which is available at the SEC website. 49.30% of the stock is currently owned by corporate insiders. 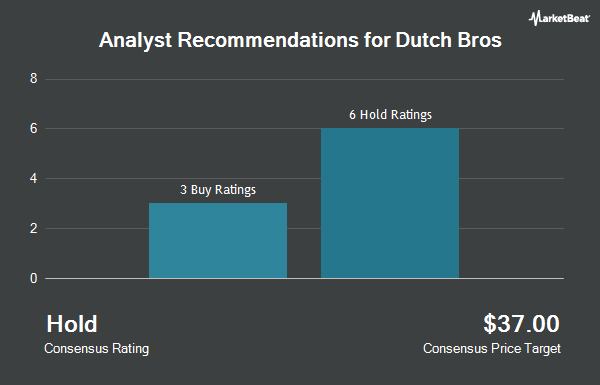