Gentex (NASDAQ:GNTX – Get Rating) will be announcing its earnings results before the market opens on Friday, January 27th. Analysts expect the company to announce earnings of $0.39 per share for the quarter. Parties interested in participating in the company’s conference call can do so using this link.

Gentex (NASDAQ:GNTX – Get Rating) last released its earnings results on Friday, October 28th. The auto parts company reported $0.31 EPS for the quarter, missing analysts’ consensus estimates of $0.39 by ($0.08). Gentex had a net margin of 17.17% and a return on equity of 16.06%. The business had revenue of $493.64 million during the quarter, compared to analyst estimates of $494.82 million. During the same period last year, the business posted $0.32 EPS. Gentex’s revenue was up 23.5% compared to the same quarter last year. On average, analysts expect Gentex to post $1 EPS for the current fiscal year and $2 EPS for the next fiscal year.

Want More Great Investing Ideas?
The business also recently announced a quarterly dividend, which was paid on Wednesday, January 18th. Shareholders of record on Friday, January 6th were given a dividend of $0.12 per share. The ex-dividend date of this dividend was Thursday, January 5th. This represents a $0.48 annualized dividend and a yield of 1.66%. Gentex’s payout ratio is currently 35.82%.

Several brokerages have recently commented on GNTX. Guggenheim decreased their price target on Gentex to $29.00 in a research note on Thursday, October 27th. The Goldman Sachs Group upgraded Gentex from a “sell” rating to a “neutral” rating and boosted their target price for the stock from $24.00 to $26.00 in a research report on Wednesday, December 14th. Finally, StockNews.com lowered Gentex from a “buy” rating to a “hold” rating in a report on Monday. Two equities research analysts have rated the stock with a hold rating and four have issued a buy rating to the stock. According to MarketBeat.com, the company presently has an average rating of “Moderate Buy” and a consensus price target of $30.80.

Hedge Funds Weigh In On Gentex 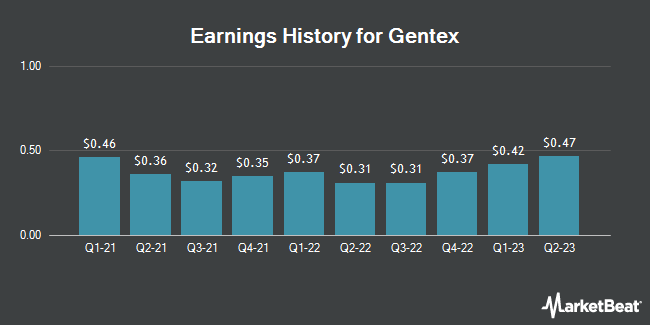 Receive News & Ratings for Gentex Daily - Enter your email address below to receive a concise daily summary of the latest news and analysts' ratings for Gentex and related companies with MarketBeat.com's FREE daily email newsletter.

Complete the form below to receive the latest headlines and analysts' recommendations for Gentex with our free daily email newsletter: