Great West Life Assurance Co. Can boosted its position in shares of Leggett & Platt, Incorporated (NYSE:LEG – Get Rating) by 3.8% during the 3rd quarter, according to its most recent Form 13F filing with the Securities and Exchange Commission. The institutional investor owned 101,190 shares of the company’s stock after acquiring an additional 3,728 shares during the quarter. Great West Life Assurance Co. Can owned 0.08% of Leggett & Platt worth $3,361,000 at the end of the most recent reporting period.

Leggett & Platt (NYSE:LEG – Get Rating) last posted its earnings results on Monday, October 31st. The company reported $0.52 EPS for the quarter, topping analysts’ consensus estimates of $0.49 by $0.03. The firm had revenue of $1.29 billion during the quarter, compared to analysts’ expectations of $1.23 billion. Leggett & Platt had a net margin of 6.86% and a return on equity of 22.32%. The business’s revenue for the quarter was down 2.2% compared to the same quarter last year. During the same quarter in the prior year, the business earned $0.71 earnings per share. On average, analysts forecast that Leggett & Platt, Incorporated will post 2.36 earnings per share for the current fiscal year.

The business also recently announced a quarterly dividend, which was paid on Friday, January 13th. Stockholders of record on Thursday, December 15th were issued a $0.44 dividend. The ex-dividend date was Wednesday, December 14th. This represents a $1.76 dividend on an annualized basis and a dividend yield of 5.09%. Leggett & Platt’s dividend payout ratio (DPR) is currently 66.42%.

Leggett & Platt, Inc engages in the manufacture and distribution of furniture and engineered components and products among homes, offices, automobiles, and commercial aircraft. It operates through the following segments: Bedding, Flooring, Furniture & Textile, and Specialized Products. The Bedding Products segment supplies products and components for the home, including mattress springs and specialty foam, as well as adjustable beds, bedding machinery, steel rod, and drawn wire. 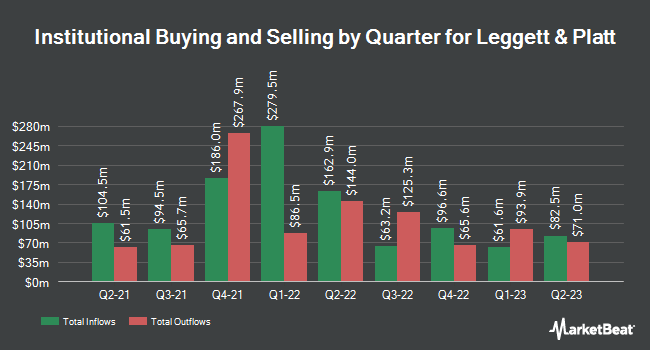 Complete the form below to receive the latest headlines and analysts' recommendations for Leggett & Platt with our free daily email newsletter: