Comerica Bank reduced its stake in Ingevity Co. (NYSE:NGVT – Get Rating) by 10.3% during the 3rd quarter, according to the company in its most recent filing with the SEC. The fund owned 16,199 shares of the company’s stock after selling 1,866 shares during the quarter. Comerica Bank’s holdings in Ingevity were worth $1,047,000 at the end of the most recent reporting period.

Want More Great Investing Ideas?
Ingevity (NYSE:NGVT – Get Rating) last announced its quarterly earnings data on Wednesday, November 2nd. The company reported $2.09 earnings per share for the quarter, beating analysts’ consensus estimates of $1.72 by $0.37. The business had revenue of $482.00 million for the quarter, compared to analyst estimates of $428.39 million. Ingevity had a net margin of 13.90% and a return on equity of 36.37%. As a group, equities research analysts predict that Ingevity Co. will post 6.36 earnings per share for the current fiscal year.

Insider Buying and Selling at Ingevity

NGVT has been the topic of several recent research reports. StockNews.com downgraded shares of Ingevity from a “strong-buy” rating to a “buy” rating in a research note on Friday, January 6th. Wells Fargo & Company upped their price objective on Ingevity from $73.00 to $76.00 and gave the stock an “equal weight” rating in a research report on Monday, January 9th. Finally, BMO Capital Markets assumed coverage on Ingevity in a report on Tuesday, October 11th. They issued an “outperform” rating and a $87.00 target price for the company. 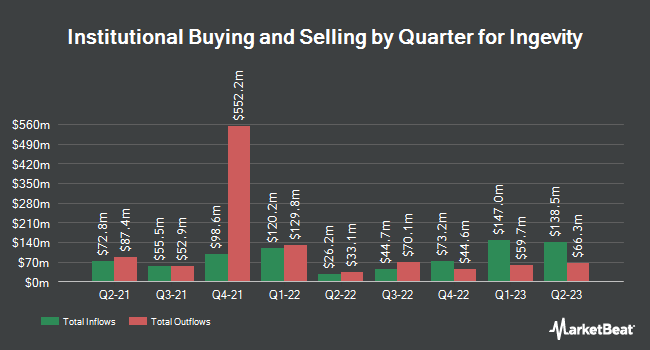 Receive News & Ratings for Ingevity Daily - Enter your email address below to receive a concise daily summary of the latest news and analysts' ratings for Ingevity and related companies with MarketBeat.com's FREE daily email newsletter.

Complete the form below to receive the latest headlines and analysts' recommendations for Ingevity with our free daily email newsletter: