PerkinElmer (NYSE:PKI – Get Rating) had its price target trimmed by Barclays from $145.00 to $140.00 in a report published on Tuesday, The Fly reports. The brokerage currently has an equal weight rating on the medical research company’s stock.

Want More Great Investing Ideas?
PerkinElmer (NYSE:PKI – Get Rating) last issued its quarterly earnings results on Tuesday, November 8th. The medical research company reported $1.51 earnings per share for the quarter, beating analysts’ consensus estimates of $1.48 by $0.03. PerkinElmer had a net margin of 13.60% and a return on equity of 15.58%. The company had revenue of $711.80 million during the quarter, compared to the consensus estimate of $1.03 billion. As a group, analysts expect that PerkinElmer will post 7.9 earnings per share for the current fiscal year.

In related news, insider Tajinder S. Vohra sold 1,663 shares of the stock in a transaction that occurred on Tuesday, December 20th. The stock was sold at an average price of $138.85, for a total value of $230,907.55. Following the transaction, the insider now owns 17,205 shares in the company, valued at $2,388,914.25. The transaction was disclosed in a filing with the Securities & Exchange Commission, which is available at this link. 0.52% of the stock is currently owned by corporate insiders.

Hedge Funds Weigh In On PerkinElmer

PerkinElmer, Inc provides products, services, and solutions to the diagnostics, life sciences, and applied services markets worldwide. It operates through two segments, Discovery & Analytical Solutions and Diagnostics. The Discovery & Analytical Solutions segment offers a suite of solutions, including reagents, informatics, and detection and imaging technologies that enable scientists to enhance research breakthroughs in the life sciences research market, as well as contract research and laboratory services. 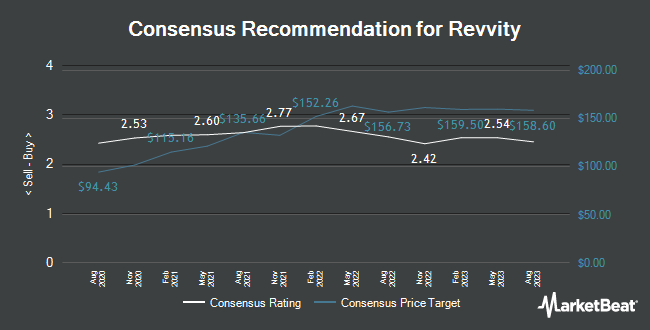 Complete the form below to receive the latest headlines and analysts' recommendations for PerkinElmer with our free daily email newsletter: