Wells Fargo & Company assumed coverage on shares of Range Resources (NYSE:RRC – Get Rating) in a research report released on Tuesday morning, The Fly reports. The brokerage issued an equal weight rating on the oil and gas exploration company’s stock.

Want More Great Investing Ideas?
Range Resources (NYSE:RRC – Get Rating) last announced its quarterly earnings data on Monday, October 24th. The oil and gas exploration company reported $1.37 earnings per share for the quarter, beating analysts’ consensus estimates of $1.32 by $0.05. The business had revenue of $1.11 billion for the quarter, compared to analyst estimates of $1.06 billion. Range Resources had a return on equity of 60.30% and a net margin of 30.87%. The company’s revenue was up 267.0% on a year-over-year basis. During the same period in the prior year, the company earned $0.52 earnings per share. Equities analysts expect that Range Resources will post 4.85 earnings per share for the current year.

The business also recently disclosed a quarterly dividend, which was paid on Friday, December 30th. Investors of record on Thursday, December 15th were given a dividend of $0.08 per share. The ex-dividend date was Wednesday, December 14th. This represents a $0.32 dividend on an annualized basis and a yield of 1.23%. Range Resources’s payout ratio is 6.57%.

Range Resources Corporation operates as an independent natural gas, natural gas liquids (NGLs), and oil company in the United States. The company engages in the exploration, development, and acquisition of natural gas and oil properties. As of December 31, 2021, the company owned and operated 1,350 net producing wells and approximately 794,000 net acres under lease located in the Appalachian region of the northeastern United States. 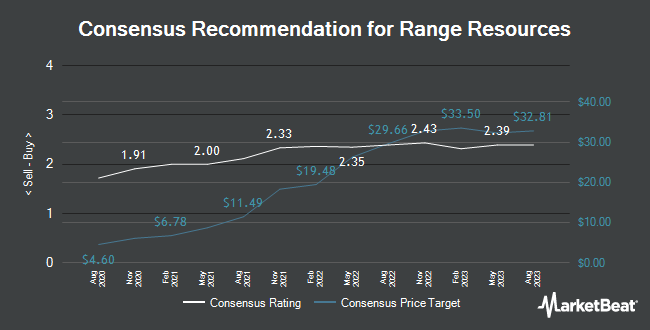 Complete the form below to receive the latest headlines and analysts' recommendations for Range Resources with our free daily email newsletter: