Raymond James & Associates decreased its holdings in i3 Verticals, Inc. (NASDAQ:IIIV – Get Rating) by 3.7% in the third quarter, according to the company in its most recent 13F filing with the Securities and Exchange Commission. The institutional investor owned 86,319 shares of the company’s stock after selling 3,356 shares during the period. Raymond James & Associates owned about 0.27% of i3 Verticals worth $1,729,000 as of its most recent SEC filing.

Want More Great Investing Ideas?
i3 Verticals (NASDAQ:IIIV – Get Rating) last posted its earnings results on Wednesday, November 16th. The company reported $0.24 earnings per share for the quarter, beating analysts’ consensus estimates of $0.13 by $0.11. i3 Verticals had a negative net margin of 5.38% and a positive return on equity of 9.31%. The firm had revenue of $85.25 million during the quarter, compared to analyst estimates of $80.79 million. Sell-side analysts anticipate that i3 Verticals, Inc. will post 0.88 earnings per share for the current fiscal year.

A number of equities research analysts have issued reports on the stock. DA Davidson increased their price objective on shares of i3 Verticals to $36.00 in a report on Monday, November 21st. Raymond James cut their price objective on shares of i3 Verticals from $40.00 to $36.00 and set a “strong-buy” rating for the company in a report on Thursday, October 6th. One analyst has rated the stock with a hold rating, two have assigned a buy rating and one has given a strong buy rating to the company’s stock. According to MarketBeat.com, the stock currently has an average rating of “Buy” and an average price target of $32.40. 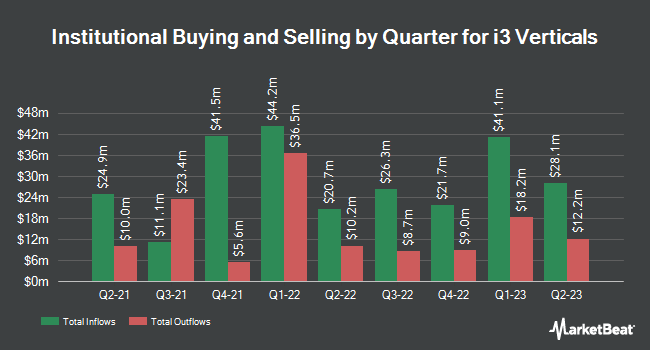