Schlumberger Limited (NYSE:SLB – Get Rating) CAO Howard Guild sold 33,063 shares of the stock in a transaction that occurred on Monday, January 23rd. The shares were sold at an average price of $56.99, for a total value of $1,884,260.37. Following the transaction, the chief accounting officer now directly owns 35,994 shares of the company’s stock, valued at $2,051,298.06. The sale was disclosed in a filing with the Securities & Exchange Commission, which is available at this hyperlink.

Want More Great Investing Ideas?
Schlumberger (NYSE:SLB – Get Rating) last released its quarterly earnings data on Friday, January 20th. The oil and gas company reported $0.71 EPS for the quarter, topping the consensus estimate of $0.69 by $0.02. The company had revenue of $7.88 billion for the quarter, compared to the consensus estimate of $7.80 billion. Schlumberger had a return on equity of 18.51% and a net margin of 12.25%. Schlumberger’s quarterly revenue was up 26.6% on a year-over-year basis. During the same period last year, the business posted $0.41 EPS. Analysts forecast that Schlumberger Limited will post 3.03 earnings per share for the current year.

The company also recently disclosed a quarterly dividend, which will be paid on Thursday, April 6th. Shareholders of record on Wednesday, February 8th will be issued a dividend of $0.25 per share. This is an increase from Schlumberger’s previous quarterly dividend of $0.18. This represents a $1.00 annualized dividend and a yield of 1.80%. The ex-dividend date is Tuesday, February 7th. Schlumberger’s dividend payout ratio (DPR) is presently 29.17%.

Schlumberger NV engages in the provision of technology for reservoir characterization, drilling, production and processing to the oil and gas industry. It operates through the following business segments: Digital and Integration, Reservoir Performance, Well Construction, and Production Systems. The Digital and Integration segment combines the company’s software and seismic businesses with its integrated offering of asset performance solutions. 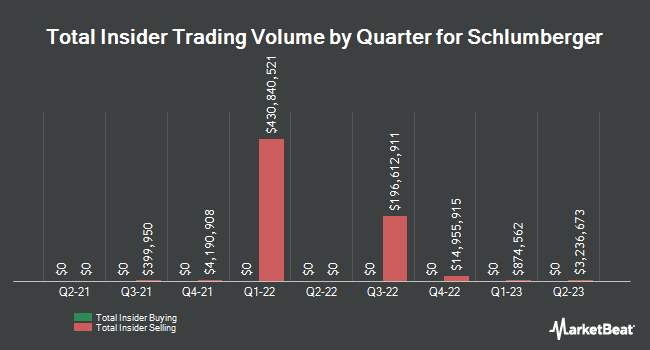 Complete the form below to receive the latest headlines and analysts' recommendations for Schlumberger with our free daily email newsletter: