SG Americas Securities LLC raised its position in shares of The Bank of Nova Scotia (NYSE:BNS – Get Rating) (TSE:BNS) by 35.6% in the 3rd quarter, according to its most recent 13F filing with the Securities and Exchange Commission (SEC). The institutional investor owned 10,924 shares of the bank’s stock after buying an additional 2,866 shares during the quarter. SG Americas Securities LLC’s holdings in Bank of Nova Scotia were worth $520,000 as of its most recent SEC filing.

Want More Great Investing Ideas?
Bank of Nova Scotia (NYSE:BNS – Get Rating) (TSE:BNS) last issued its earnings results on Tuesday, November 29th. The bank reported C$1.55 earnings per share for the quarter, beating analysts’ consensus estimates of C$1.49 by C$0.06. The business had revenue of C$5.73 billion during the quarter, compared to analyst estimates of C$6.21 billion. Bank of Nova Scotia had a return on equity of 15.54% and a net margin of 21.26%. As a group, sell-side analysts predict that The Bank of Nova Scotia will post 6.11 earnings per share for the current year.

The company also recently announced a quarterly dividend, which will be paid on Friday, January 27th. Shareholders of record on Wednesday, January 4th will be given a dividend of $0.756 per share. This represents a $3.02 dividend on an annualized basis and a yield of 5.83%. The ex-dividend date of this dividend is Tuesday, January 3rd. Bank of Nova Scotia’s dividend payout ratio (DPR) is presently 48.72%.

BNS has been the subject of a number of recent research reports. Scotiabank dropped their target price on Bank of Nova Scotia from C$83.50 to C$81.50 and set a “sector perform” rating for the company in a report on Wednesday, November 30th. StockNews.com initiated coverage on Bank of Nova Scotia in a report on Wednesday, October 12th. They issued a “hold” rating for the company. Ten research analysts have rated the stock with a hold rating and two have issued a buy rating to the stock. Based on data from MarketBeat, the company has a consensus rating of “Hold” and an average price target of C$89.77. 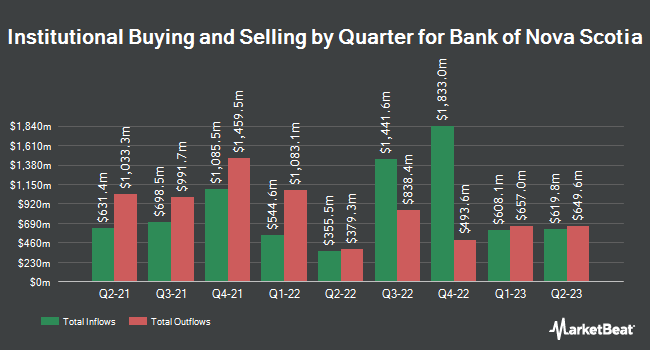