Shares of Shake Shack Inc. (NYSE:SHAK – Get Rating) have earned a consensus rating of “Hold” from the sixteen analysts that are covering the stock, Marketbeat Ratings reports. Three investment analysts have rated the stock with a sell recommendation, eight have assigned a hold recommendation and four have given a buy recommendation to the company. The average 1 year target price among brokerages that have issued a report on the stock in the last year is $58.21.

In related news, COO Zach Koff sold 3,900 shares of the company’s stock in a transaction on Friday, October 28th. The shares were sold at an average price of $55.00, for a total value of $214,500.00. Following the completion of the sale, the chief operating officer now directly owns 31,085 shares in the company, valued at $1,709,675. The sale was disclosed in a filing with the Securities & Exchange Commission, which is available at the SEC website. 9.98% of the stock is currently owned by corporate insiders.

Shake Shack (NYSE:SHAK – Get Rating) last released its earnings results on Thursday, November 3rd. The company reported ($0.06) earnings per share for the quarter, hitting analysts’ consensus estimates of ($0.06). Shake Shack had a negative return on equity of 3.52% and a negative net margin of 2.67%. The firm had revenue of $227.81 million during the quarter, compared to the consensus estimate of $226.79 million. Research analysts predict that Shake Shack will post -0.37 EPS for the current fiscal year. 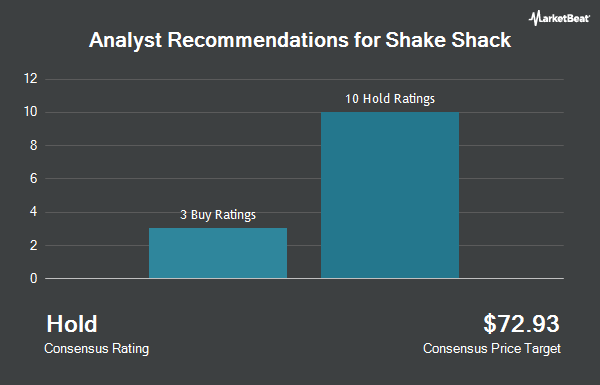 Complete the form below to receive the latest headlines and analysts' recommendations for Shake Shack with our free daily email newsletter: