TFI International (NYSE:TFII – Get Rating) had its target price raised by Scotiabank from C$168.00 to C$170.00 in a report issued on Tuesday morning, The Fly reports.

Want More Great Investing Ideas?
TFI International (NYSE:TFII – Get Rating) last posted its earnings results on Thursday, October 27th. The company reported $2.01 EPS for the quarter, topping analysts’ consensus estimates of $1.96 by $0.05. The business had revenue of $2.24 billion during the quarter, compared to the consensus estimate of $2.31 billion. TFI International had a net margin of 9.05% and a return on equity of 31.66%. As a group, analysts anticipate that TFI International will post 8.02 EPS for the current year.

The business also recently disclosed a quarterly dividend, which was paid on Monday, January 16th. Shareholders of record on Friday, December 30th were issued a dividend of $0.35 per share. This represents a $1.40 annualized dividend and a dividend yield of 1.28%. The ex-dividend date was Thursday, December 29th. This is an increase from TFI International’s previous quarterly dividend of $0.27. TFI International’s dividend payout ratio is 15.89%.

TFI International, Inc engages in the provision of freight transportation and logistics services. It operates through the following segments: Package and Courier, Less-Than-Truckload, Truckload, and Logistics. The Package and Courier segment consists of pickup, transport, and delivery of items across North America. 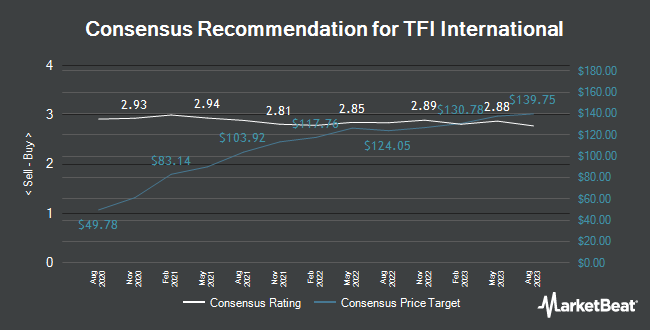