Want More Great Investing Ideas?
Vulcan Materials (NYSE:VMC – Get Rating) last released its earnings results on Wednesday, November 2nd. The construction company reported $1.78 EPS for the quarter, topping analysts’ consensus estimates of $1.71 by $0.07. Vulcan Materials had a return on equity of 10.56% and a net margin of 8.26%. The company had revenue of $2.09 billion for the quarter, compared to the consensus estimate of $2 billion. On average, analysts predict that Vulcan Materials will post 5.34 EPS for the current year.

In other Vulcan Materials news, SVP David P. Clement sold 2,000 shares of Vulcan Materials stock in a transaction on Monday, December 5th. The stock was sold at an average price of $180.00, for a total transaction of $360,000.00. Following the sale, the senior vice president now owns 1,970 shares of the company’s stock, valued at approximately $354,600. The sale was disclosed in a document filed with the Securities & Exchange Commission, which can be accessed through this hyperlink. 0.57% of the stock is owned by company insiders.

Vulcan Materials Co engages in the provision of basic materials and supply for the infrastructure and construction industries. It operates through the following business segments: Aggregates, Asphalt, Concrete, and Calcium. The Aggregates segment produces and sells asphalt mix and ready-mixed concrete primarily in its mid-Atlantic, Georgia, Southwestern, Tennessee, and Western markets. 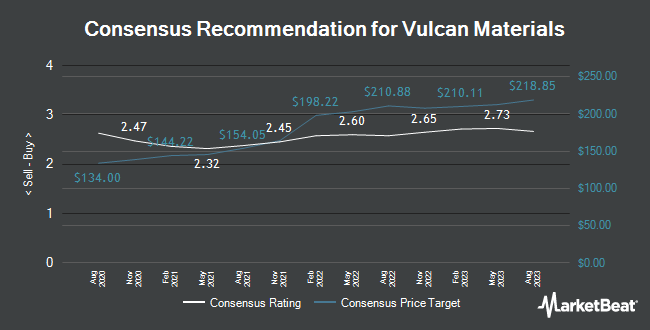 Complete the form below to receive the latest headlines and analysts' recommendations for Vulcan Materials with our free daily email newsletter: